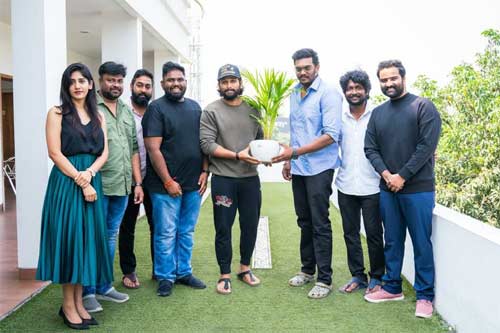 Colour Photo, starring Suhas and Chandini Chowdhary, is one of the most talked about films in recent times. And now, Stylish Star Allu Arjun has joined the long list of celebrities including Ravi Teja and other bigwigs who have praised the film for its sensitive subject and how well the team pulled it off. Directed by newcomer Sandeep Raj, the film was produced by Sai Rajesh and Banerjee Muppaneni.

After meeting the whole team at his office in Hyderabad, Allu Arjun presented them with a tree sapling and took to Twitter saying that Colour Photo was a very sweet film with amazing music, emotions, and performances. He also added that he was thrilled to see a good film after a very long time.

The team was evidently touched with his gesture and how well he spoke to them for almost 30 minutes. It was indeed a memorable moment for the whole unit. Apart from Suhas and Chandini, Sunil and Harsha Chemudu also played key roles. Kaala Bhairava scored the music.