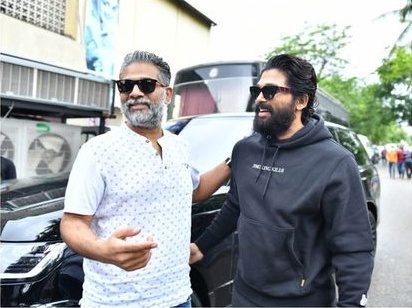 It is known that veteran producer Allu Aravind’s elder brother Allu Venkatesh aka Bobby is foraying into film production with Varun Tej’s Ghani. The film’s shooting is currently underway in Hyderabad. Yesterday, Bobby’s younger brother and hero Allu Arjun visited Ghani’s set and he couldn’t be more proud of his brother.

Allu Arjun took to Instagram and shared a picture of him and Bobby on Ghani’s set. “A very prideful moment to see my brother Allu Bobby in a shooting as a producer. So glad his journey has started as a film maker officially. Welcome on board to ALLU ENT,” the Pushpa actor posted. Well, will there be a collaboration between the Allu brothers in near future?