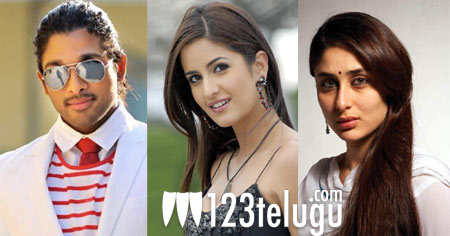 Allu Arjun is going to share the stage with Bollywood hotties Katrina Kaif and Kareena Kapoor. He has been invited to open the store of Emmmanuel silks in Kochi on March 25 along with Katrina Kaif and Kareena Kapoor. Allu Arjun enjoys enormous popularity in Kerala and this is the first time he has been invited to open a store. Couple of years ago, he was given the ‘Youth Icon’ award by a popular Malayalam TV channel. We hear that Allu Arjun was paid a bomb to inaugurate the store suggesting how popular he is in the state. Of late, all his films are being dubbed in Malayalam and films like Badrinath and Arya 2 got huge openings in Kerala. It’s probably only a matter of time before he acts in a straight Malayalam film to enthrall his fans in Kerala.