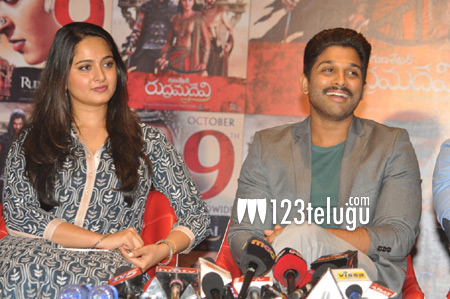 As the release date is fast approaching, team Rudhramadevi is busy with aggressive promotions. Earlier today, the unit attended a press meet in Hyderabad. Speaking on the occasion, Gunasekhar once again confirmed that the 2D & 3D versions will hit the screens worldwide on October 9th. He revealed that the film has been made with a whopping 80 Crore budget.

Allu Arjun, who played a crucial role in the film, is also taking part in the promotions. He shared memories from his time on the project and lauded the efforts put in by Anushka for the film. Speaking further, Allu Arjun said Anushka’s Arundathi proved that a woman oriented film can match the success of a star hero’s film if there is solid content. He added that Anushka is the most dedicated artist in India and she is the only actress who has the courage to act in female-centric films.

The post production work has been completed and the film is set for a grand release in Telugu, Tamil and Hindi versions. The total run-time is 157 Minutes. Guna Team Works banner has produced it and Ilayaraja scored the music for the film.