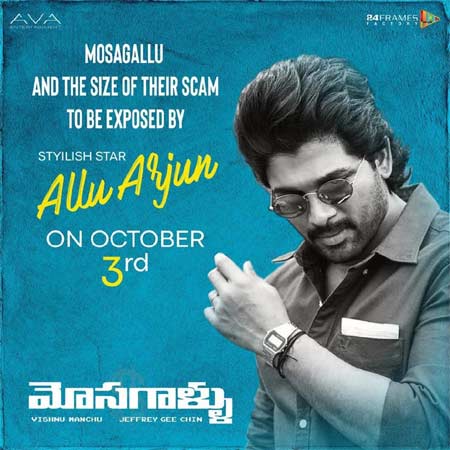 It is a known fact that Manchu Vishnu is doing a film called Mosagallu. Now, the latest we hear is that Stylish Star Allu Arjun has come forward to lend his support in promotions of Vishnu Manchu starrer Mosagallu.

The title key theme music released by Victory Venkatesh got an exceptional response and music director Sam CS is winning accolades for his work.

The talk is that Allu Arjun will expose Mosagallu and the size of their scam on October 3rd. What and how it will be unveiled, only time will tell. The film is based on a true story about the biggest IT scam in history; which originated in India and shook the United States of America.

Vishnu Manchu is producing the film, while Jeffrey Chin is directing it. Kajal Aggarwal will be seen as Vishnu’s sister.