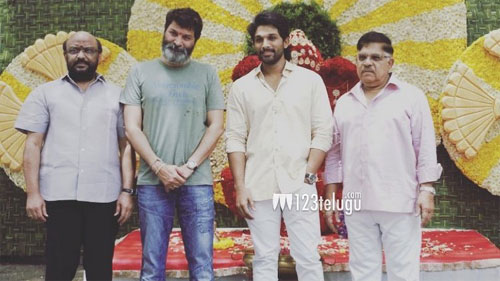 Finally, after more than three months of its official announcement, the highly-anticipated project in the combination of Allu Arjun and Trivikram had its muhurtham ceremony in Hyderabad this morning. The Stylish Star himself sounded the first clap to kick-start the formalities in style.

Although the makers are tight-lipped about the story, this as-yet-untitled film is said to be an emotional family entertainer with an emphasis on the father-son relationship. Pooja Hegde is the leading lady in the movie. The film’s regular shoot will commence from April 24.

Thaman is scoring the music for this film, which is being produced by senior filmmakers Allu Aravind and Radhakrishna. Stay tuned for further updates.