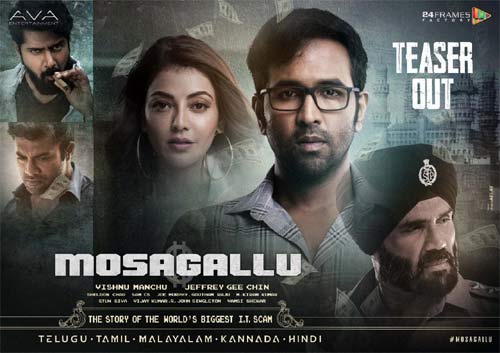 Hero Allu Arjun launched the teaser for Vishnu Manchu and Kajal Aggarwal’s upcoming Hollywood film, Mosagallu. The teaser ‘exposes’ who the Mosagallu are and the size of their scam.

The teaser starts off with the US President Donald Trump at the White House, saying, “We will find you. We will eliminate you. And I’m ready and prepared to take whatever action is necessary,” while warning the offenders of the biggest IT scam that originated in India and shook the United States Of America.

It’s later revealed that Vishnu Manchu and Kajal Aggarwal are the masterminds behind the scam. The striking visuals are perfectly complemented by Sam CS’s pulsating music.

Mosagallu will be releasing in Telugu, Tamil, Malayalam, Kannada and Hindi apart from English. Vishnu Manchu is producing the film, while Jeffrey Chin is directing it. Kajal Aggarwal will be seen as Vishnu’s sister. Bollywood star Suniel Shetty makes his Tollywood debut with this flick.