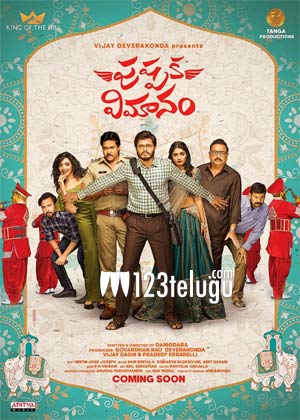 Here’s an exciting opportunity for all the fans to see Allu Arjun and Vijay Deverakonda sharing stage at the pre-release event of Vijay’s upcoming home production, Pushpaka Vimaanam. Starring Vijay’s brother Anand Deverakonda, Geeth Saini and Saanve Megghana in lead roles, the film is scheduled to hit the big screens on November 12.

Pushpaka Vimaanam’s pre-release event will be held on October 30. During the event, Allu Arjun will also be launching the film’s theatrical trailer. Both Bunny and Vijay share a good rapport with each other, and their fans will get to see them brightening up the stage with their camaraderie after a long time.

Directed by debutant Damodara, Pushpaka Vimaanam is produced by Vijay and Anand’s father Govardhana Rao Deverakonda, Vijay Mattapally and Pradeep Errabelly. Vijay Deverakonda is presenting the movie under his King of the Hill banner.