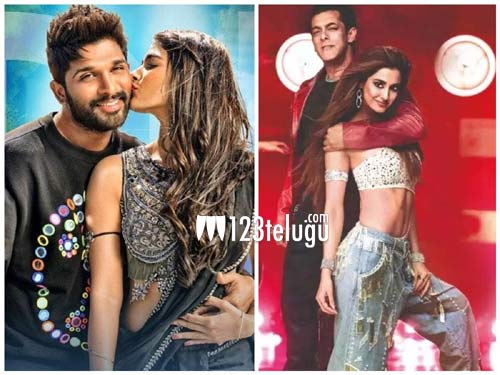 Salman Khan’s upcoming film Radhe is gearing up for its release in mid-May and the promotions are going on in full swing for the past. Directed by Prabhu Deva, the film has Salman Khan and Disha Patani in lead roles. Incidentally, the makers used ‘Seeti Maar’ song from Allu Arjun’s Duvvada Jagannadham in this film, and the official video was unveiled today.

On this occasion, Salman Khan took to Twitter and praised Allu Arjun on a whole new level. Talking about Bunny’s dance moves and style, Salman Khan said, “ ‪Thank u Allu arjun for seeti maar absolutely loved the way u have performed in the song, the way u dance, your style, u r simply fantastic.. tk care n b safe. Rgds to ur family .. love u brother @alluarjun‬.”

Not surprisingly, Allu Arjun was floored by these comments from Salman Khan and he thanked him saying, “ ‪Thank you soo much Salman garu . It’s a pleasure to receive a compliment from you . It’s such a sweet gesture. Looking forward for the RADHE magic on screens with fans doing SEETI MAAR for you . Thank you for your love . 🖤AA‬.”