Pushpa: The Rise showcased Allu Arjun’s impeccable performance, which has been gaining rave reviews from audiences and actors also. Now, a Bollywood actor heaped praise on the Icon Star and Pushpa.

Hindi actor, Arjun Kapoor took to Instagram and posted a story about the phenomenal performance of Allu Arjun in Pushpa. He wrote,” Pushpa is not a film. It’s an experience, a juggernaut of attitude, intensity and coolness put together in one smooth poetic motion picture.”

He also added ” Allu Arjun for me was always Arya all these years & as a fan to see him for from Arya to Pushpa was just amazing… Pushpa isn’t a flower, it’s fire… The fire of his eyes burning on the big screen.”

Allu Arjun shared the story and replied, “Thank you soo much for such heartfelt words. Elated that you felt the fire.”

To note, the movie is currently streaming on Amazon Prime Video in 4 Indian languages. Besides, it is doing well at the ticket windows in North India. 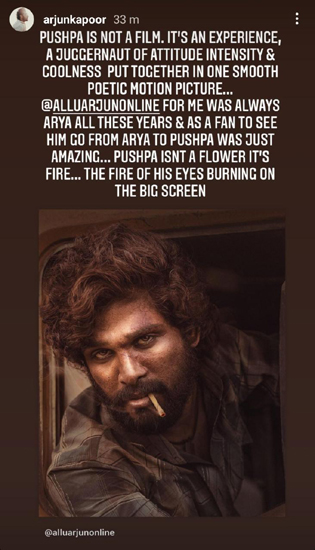