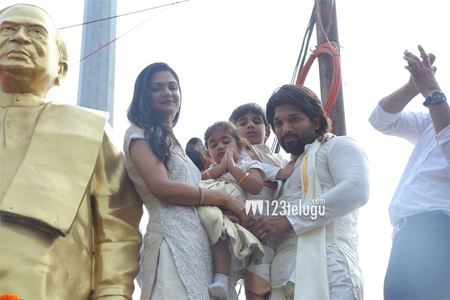 The snaps of Allu Arjun holidaying in Palakollu, which is his native place, went viral all over. The star hero also paid his respects to the statue of his grandfather Allu Ramlingayya yesterday.

His fans welcomed him in a big manner and the news is that Bunny has announced a donation of 10 lakhs to build a Kalyana Mandapam in Palakollu.

This gesture of his has come in for a good praise all over. Meanwhile, Bunny will soon start filming for his new film in the direction of Trivikram