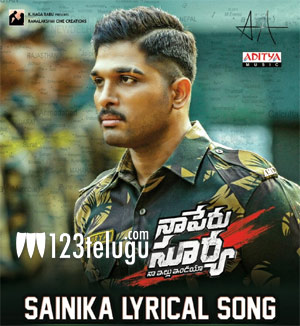 Allu Arjun’s much-awaited patriotic drama, Naa Peru Surya Naa Illu India, is fast nearing completion. The film’s first song, ‘Sainika’, which was unveiled on the occasion of India’s 69th Republic Day, has been getting a superb response from all quarters.

As per the latest reports, the Stylish Star is determined to give out a strong message to today’s youngsters through the film and decided to go all out for his military man’s role when director Vakkantham Vamsi had narrated him the script. Apparently, the Sainika song was Allu Arjun’s idea.

Naa Peru Surya Naa Illu India is slated to hit the screens on April 27. The film has Anu Emmanuel as the female lead. Lagadapati Sridhar and Bunny Vas are producing this high-budget entertainer and Naga Babu is presenting it.