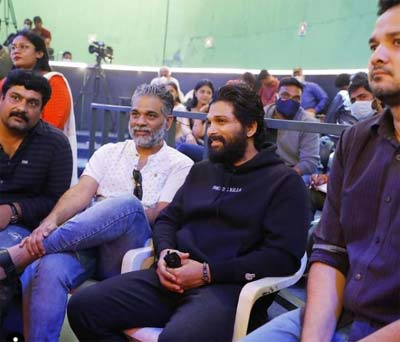 Mega cousins often meet during family get-togethers and their film events. However, very rarely do they meet while shooting on location. In one such rare moment, hero Allu Arjun paid a surprise visit to his cousin Varun Tej on the set of his ongoing boxing drama, Ghani.

Allu Arjun’s elder brother Allu Venkatesh aka Bobby took to Instagram and shared a picture of him and Bunny on Ghani’s set. “All of us curious about Ghani’s (Varun) boxing skills and transformation,” Bobby posted along with the picture. However, Varun is not seen in the picture.

It is known that Bobby is making his debut as a producer with Ghani. Being directed by debutant Kiran Korrapati, the film has Upendra and Saiee Manjrekar in key roles.