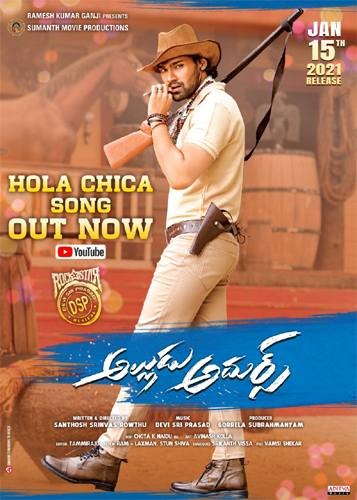 The makers of Bellamkonda Sai Srinivas, Anu Emmanuel and Nabha Natesh’s upcoming action entertainer, Alludu Adhurs, released the energetic love song ‘Hola Chica’. The song, composed by Devi Sri Prasad, starts off with Spanish lyrics and then the Telugu lyrics takeover and finally ends up as a rocking duet.

Hola Chica has been sung by Jaspreet Jasz and Rainina Reddy. Young lyricist Shree Mani has penned the song. The song has been shot on Sai and Nabha Natesh in some picturesque locales. This Santhosh Srinivas directorial has been produced under Sumanth Movie Productions. The film is gearing up for release during the upcoming Sankranthi season.