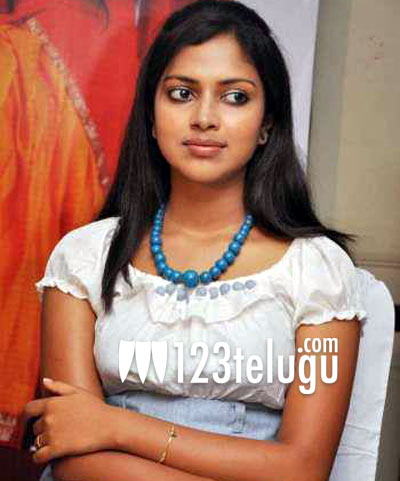 Amala Paul is one of the youngest and fastest rising stars in South Indian cinema. She recently turned 21 and already she has films like Mynaa, Vettai, Love Failure, Run Baby Run which have given her career a big boost. In Telugu, she has suddenly become a hot favourite and within a short span of time, she bagged films like Nayak and Iddarammayilatho. She’s currently shooting for Samuthirakani’s upcoming bilingual film in Chennai. The film is titled as Jenda Pai Kapiraju in Telugu and Nani, Amala Paul are playing the lead roles, whereas the Tamil version Nimirndhu Nil has Jayam Ravi and Amala Paul playing the lead roles. Some parts of the film were earlier shot in Chalakudy in Kerala and Goa. Ever since Amala Paul got back to the sets of the film Chennai earlier this week, she can’t stop praising her director. “So fantastic to work wit dir Samudrakani sir..Enjoying every bit of the shoot.so much learning the craft ..my 12th film and so much to learn. Working with Samudrakani sir is like, i don’t regret anymore for not going any acting classes 🙂 #blissatwork,” she posted on Twitter. Soon after wrapping up this schedule, she’ll juggle between the sets of her upcoming Tamil film with Vijay and Allu Arjun starrer Iddarammayilatho.