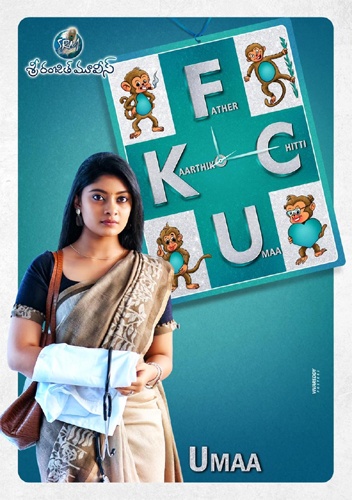 After Jagapathi Babu as the father and baby Sahashritha as Chitti, the makers of the upcoming film, Father, Chitti, Umaa, Karthik (FCUK) today unveiled the film’s third poster. Young Tamil actress Ammu Abhirami’s look as Dr. Umaa is revealed in the new poster and she looks simple yet beautiful in it.

Ammu Abhirami is famous for her role opposite Dhanush in Vetrimaaran’s Asuran and Vishnu Vishal’s Ratchasan. She is debuting in Telugu with FCUK. She is also making her debut in the OTT world with an upcoming show in Netflix. With the tagline “Umaa is Ummah”, Ammu is sure to steal the hearts of Telugu movie lovers with FCUK.

Vidyasagar Raju is directing FCUK and Damu is bankrolling it under Sri Ranjith Movies banner. Young actor Ram Karthik also plays a lead role in the movie. FCUK will hit screens in summer next year.