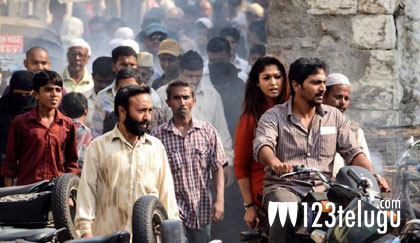 The principal shooting of Sekhar Kammula’s upcoming film Anamika is going on at a brisk pace. The film is being simulatenosuly shot in Telugu and Tamil. Nayanthara is playing the lead role in this film and Vaibhav Reddy is playing an important role. Anamika is the official remake of Vidya Balan starrer Kahaani and it’s being produced by Endemol India, Logline Productions Pvt. Ltd. and Select Media Holdings Pvt. Ltd. The latest news is that the entire film’s shooting is going to be wrapped up by the end of July. So far, the film has been shot for 36 days and Sekhar Kammula is confident that he can wrap up the shoot in another three weeks.

Considering the fact that most of his previous films took several months to complete, this is definitely a record in Sekhar Kammula’s career. Popular writer Yendamuri Veerendranath has worked along with Sekhar Kammula to adapt the story in Telugu and Tamil. M M Keeravani is scoring the music and Vijay C Kumar is the cinematographer. More details about the film will be revealed soon.