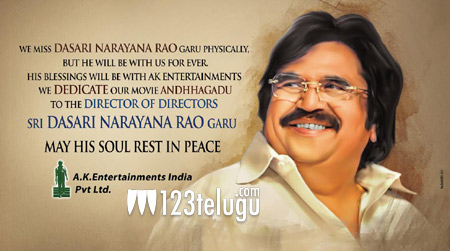 Veteran legend Dasari’s​ passing away is a huge loss to the entire film industry and several film personalities describe the director’s death as a personal loss to them.

In a touching gesture, the makers of Raj Tarun and Hebah Patel starrer romantic entertainer, Andhhagadu, have announced that they are dedicating their film to Dasari. Andhhagadu is slated to release on June 2.

Andhhagadu’s makers remembered how Dasari used to watch all the films produced on their AK Entertainments banner and encourage them. AK Entertainments also hailed Dasari’s support to small films and producers and also his valuable contribution to Indian Cinema.