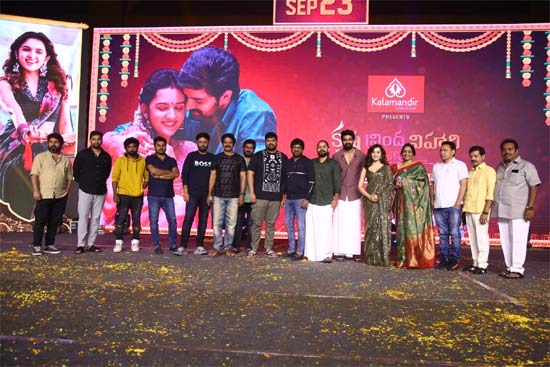 Young actor Naga Shaurya’s next film Krishna Vrindha Vihari is up for a grand release on 23rd September. As part of the promotions, the pre-release event was held today in Hyderabad and Anil Ravipudi graced it.

Speaking at the event, Director Aneesh Krishna said that he is extremely thankful to Naga Shaurya who has given extraordinary support to the film not just in terms of acting, but also by promoting it. The director thanked Radhika Sarathkumar for being such a strong support to the film around whom the movie revolves.

The director said that he was shocked to see Shirley Setia dub by herself who was completely brought up in New Zealand. Aneesh extended his thanks to all the technicians by listing out all their names. The director said that Mahati Swara Sagar and his background music have given depth to the movie.