Anil Ravipudi pens a heartfelt thanks note to the audience
Published on Jul 15, 2022 10:30 pm IST 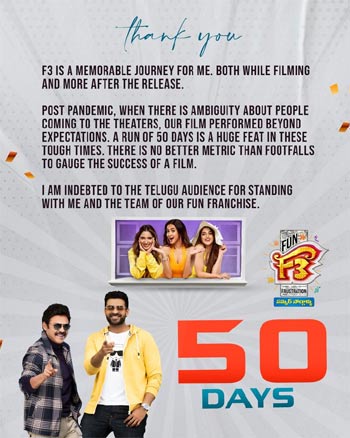 F3 starring Victory Venkatesh and Mega Prince Varun Tej released recently and became a commercial success. The movie successfully completed 50 days in 10 centers. Much elated by the love and support the film received, director Anil Ravipudi penned a heartfelt thank you note to the audience.

He stated that he would be indebted to the Telugu audience for encouraging the film by coming to the theatres in these ambiguous situations. He went on to add that F3 is a memorable journey for him both while shooting and post-release.

Tamannaah Bhatia and Mehreen Pirzada played the female leads. Pooja Hedge sizzled in a special song. Bankrolled by Sri Venkateswara Creations, the film has music by DSP. This comedy entertainer which won the viewer’s hearts in theatres will be available to stream on Sony liv and Netflix from July 22.

Eternally grateful for all your Love and support! 🙏🏻❤️#F3Movie completes 50 days in 10 Centres! 💥😊🎉