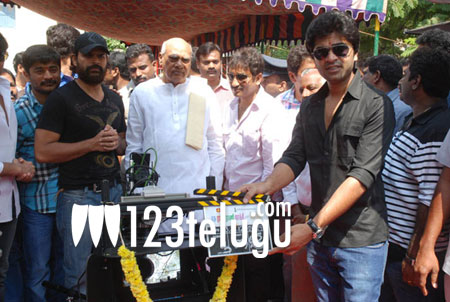 Anil Sunkara, one of the producers of Dookudu, is turning director with a new film titled Action and it has a tagline ‘With Entertainment’. The film was launched earlier today in Chennai and K Rosaiah, Srinu Vaitla, Simbu, A M Rathnam, Venkat Prabhu, Gopimohan, Kodanda Ramireddy and several others graced the movie launch. The film will be simultaneously shot in Telugu and Tamil in 3D. Srinu Vaitla clapped the board for the Telugu version and Kodanda Ramireddy directed the first shot and Simbu, Venkat Prabhu did the respective honours for the Tamil version. Allari Naresh, Kick Shaam, Vaibhav Reddy, Raju Sundaram, Sneha Ullal, Vimala Raman and Kamna Jethmalani are playing the lead roles in this multi-starrer. The film is being made on a budget of Rs 15 crores and Sunkara Ramabrahmam is going to produce the film on AK Entertainments banner. Bappi Lahari’s son Bappa Lahari is going to compose the music and Bappi Lahari is going compose a special song for the film. S S Thaman is going to compose the background score and Sarvesh Murari is the cinematographer. The film will go on floors soon.