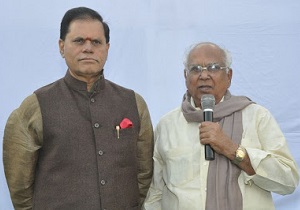 Veteran actor and Telugu Cinema legend, Dr. Akkineni Nageswara Rao, has celebrated his 90th birthday in style. Yesterday, ANR presented Lifetime achievement awards and a ‘swarna kankanam’ to some prominent people. Super Star Krishna and Smt Vijaya Nirmala were feted at the event in a grand away.

Super Star Krishna expressed his thanks and said that ANR was a big source of inspiration for coming into the Film Industry. Director K.Raghavendra Rao. social filmmaker R.Narayana Murthy, Prasad Thotakura and Ali were some of the other celebrities who were felicitated at the event.