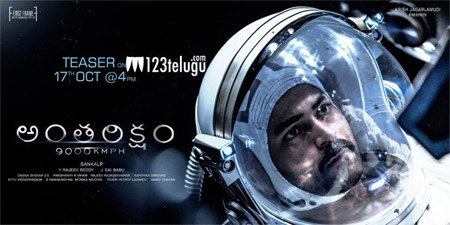 All eyes are on Ghazi fame Sankalp Reddy’s upcoming space thriller, Antariksham 9,000 Kmph. The film has Varun Tej playing the role of an astronaut. Lavanya Tripathi and Aditi Rao Hydari are the leading ladies in the movie.

According to the latest updates, Antariksham’s much-awaited teaser will be released on October 17. However, the makers are yet to make an official announcement regarding the teaser launch date. The film’s post-production work is underway at the moment.

Antariksham is being produced by director Krish and Rajiv Reddy. The film is scheduled for release on December 21. Prashanth Vihari is the film’s music composer.