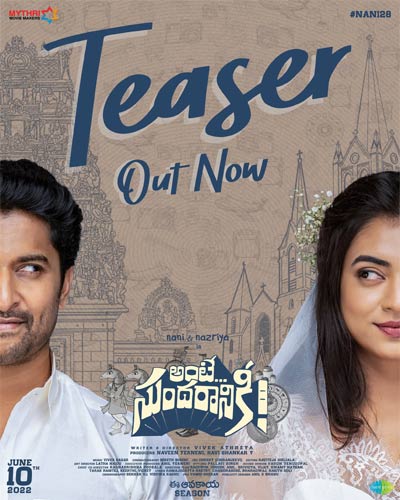 Natural Star Nani will be seen next in a romantic-comedy entertainer titled Ante Sundaraniki. The teaser of the Vivek Athreya’s directorial was released yesterday and created a huge buzz online.

The hilarious teaser has raised the expectations on the movie. The latest news is that the teaser has garnered around 11 million views, which is the highest so far for Natural Star Nani, in 24 hours. Also, it is still trending top on YouTube with more than 3.6 lakh likes. The views and the likes the teaser got are on par with some top star movies.

Nazriya Nazim makes her Tollywood debut with this movie. Nadiya, Naresh, Harsha, Rohini, and others are a part of this crazy movie.

Mythri Movie Makers produced this movie. Vivek Sagar scored music, while Nikesh Bommi handled the cinematography. The film will have a simultaneous release in Tamil and Malayalam on June 10, 2022.