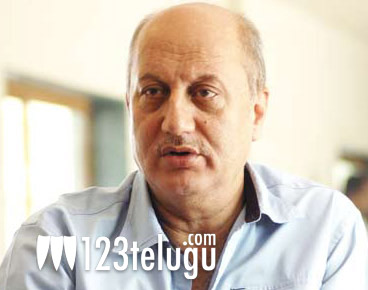 The search for a suitable replacement for Prakash Raj in Srikanth Addala’s Seethamma Vaakitlo Sirimalle Chettu is on full throttle these days. We had earlier reported that Tamil actor Sathyaraj was called for a look test; however, the team was not satisfied with the look. The latest buzz is that Srikanth Addala and producer Dil Raju are in talks with popular Hindi actor Anupam Kher to play the role of Venkatesh, Mahesh Babu’s father in the film. Anupam Kher confirmed the news but added that nothing has been finalized yet. Meanwhile, the film will soon be shot in Ramoji Film City and Mahesh Babu is going to join the team again on March 12. Anjali and Samantha are playing the lead roles in this family entertainer. Mickey J Meyer is composing the music and KV Guhan is the cinematographer