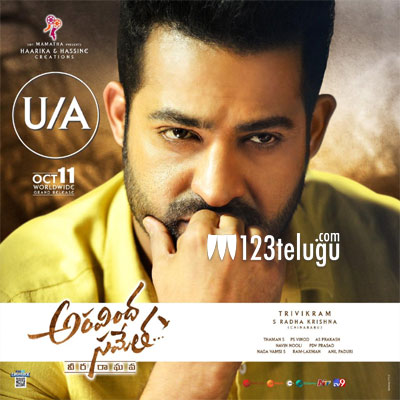 So, the last minute formalities of Aravinda Sametha have been wrapped up as the film got a U/A from the censors. With this, the film is ready for a grand release on the 11th of this month as a Dussera special.

The film is NTR’s biggest release to date and is carrying a superb buzz. The talk from the censor people is that the film has come out quite well and will be filled with some realistic emotions.

The trade is expecting some solid numbers from the first weekend. The music has caught on well and the trailers have generated a good buzz. Haarika and Haasine Creations produce this film which has Pooja Hegde as the female lead