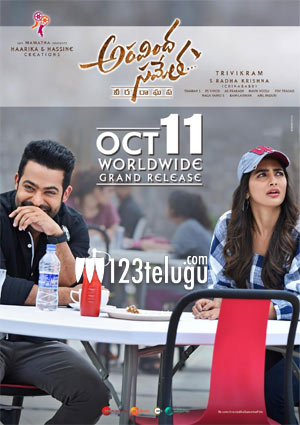 Expectations are humongous on Aravindha Sametha, the first outing from the NTR-Trivikram’s combination. All these days, this intense action entertainer was rumoured to be hitting theaters on October 11 as a Dasara festive treat for fans.

But all the speculations have now turned true. Aravindha Sametha’s makers have officially announced that the film is slated for release on October 11. Aravindha Sametha’s censor formalities will be completed in the first week of October. A grand pre-release event is expected to be held just a few days before the film’s release.

Pooja Hegde is the heroine in Aravindha Sametha. Eesha Rebba, Naga Babu and Jagapathi Babu essay crucial roles in the film. Man in form Thaman’s soundtrack has become a big hit amongst fans. S Radhakrishna is bankrolling the film with a huge budget.