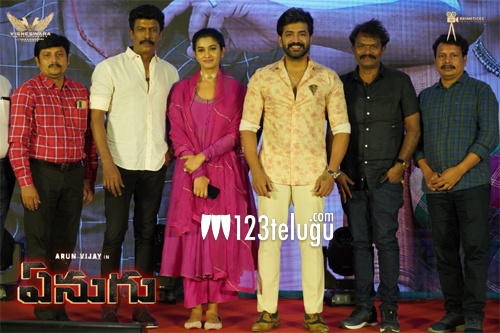 Actor Arun Vijay, well known to Telugu audiences with the films – Bruce Lee and Saaho, is coming with Enugu, an action drama. The multilingual Kollywood movie is directed by mass director Hari. Priya Bhavani Shankar is the leading lady in this flick.

The pre-release event of the movie happened tonight at the Taj Deccan Hotel in Hyderabad in the presence of several guests. During the event, the actor Arun Vijay said, “This film is going to be released simultaneously in both Telugu and Tamil, and is the biggest film in my career. It has been great working with Hari sir.”

“Besides strong emotional content, ‘Enugu’ also boasts of family values. Everyone is going to connect with its content. GV Prakash Kumar has done some great music. The making values are excellent. I am confident that this content-based movie will be loved by the Telugu audience,” concluded the actor.

Samuthirakani, Ramachandra Raju, Radhika Sarathkumar, Yogi Babu, and Ammu Abhirami are also a part of this movie. which is produced by Ch Satish Kumar under the Vigneswara Entertainments banner. The makers will announce the release date very soon.