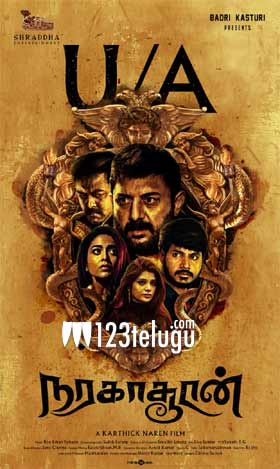 It looks like Karthick Naren’s Naragasooran, which was in news for all the wrong reasons few months ago, is soon in offing. The film has Arvind Swamy, Shriya, Sundeep Kishan and Athmika in lead roles.

Although the film’s shoot was wrapped up a long time ago, rumours were abuzz that all was not well between Karthick and Gautham Menon, who was one of the producers of the film. And earlier this year, both of them had a spat on Twitter, which led Gautham Menon to issue a clarification that all the dues were settled and there were no financial issues with the film.

While it isn’t clear what exactly happened between the two after their spat, the latest poster of the film doesn’t mention of Gautham Menon or his banner. The film has already been censored and it has been given U/A. An official announcement is going to be made soon about its date of release.

#Naragasooran censored as U/A with no cuts. Runtime : 1 hr 50 mins. Release date will be announced soon. Trailer on the way 🙂 pic.twitter.com/uxLo5pdbUj