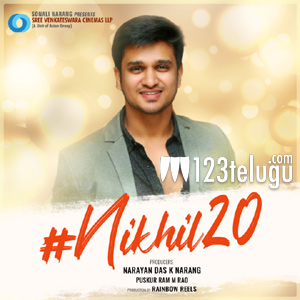 Nikhil who is riding high on the success of his last flick Arjun Suravaram has officially signed his 20th film. The film will be a unique project and Narayan Das K Narang and Puskur Ram M Rao will produce the film.

Sonali Narang presents this film under Sree Venkateswara Cinemas Llp (A Unit Of Asian Group). The production is by Rainbow Reels. What’s special is that the film will be made on a big budget and the director and other technical crew will be announced soon.

As of now, Nikhil is presently doing Kartikeya 2 with Chandoo Mondeti and 18 Pages under the direction of Palnati Surya Pratap.