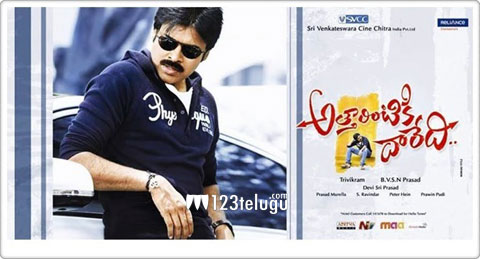 TFI is witnessing a sudden spurt in activity on the release dates front. Hours after Harish Shankar confirmed the release date of NTR’s ‘Ramayya Vasthavayya’, the production time of Pawan Kalyan’s ‘Atharintiki Dharedhi’ has sent out a press note, stating that the movie will hit the screens on October 9th.

Will both films release as announced or will one project shift to a later date? That remains to be seen. While it becomes a little tough for distributors to cater to two very big budget films at the same time, it is not impossible. In recent times, ‘Seethamma Vakitlo Sirimalle Chettu’ and ‘Naayak’ released with a very short gap.

‘Atharintiki Dharedhi’ has Pawan Kalyan and Samantha in lead roles. Praneetha is essaying an important role. Trivikram Srinivas is the director and BVSN Prasad is the producer. Music has been composed by Devi Sri Prasad.