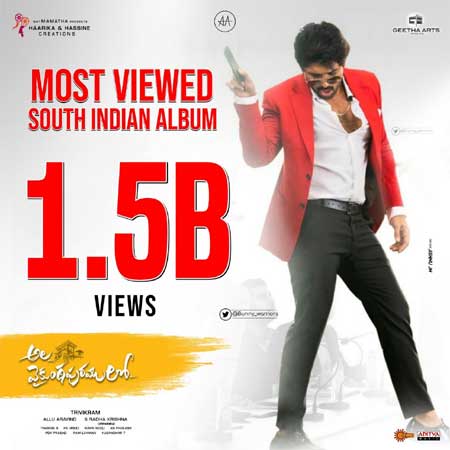 It’s been nearly nine months since Ala Vaikuntapuramulo released in theatres, and the film & its music are continuing to break records even now. Recently, the film’s TV premiere set an all-time record for the highest TRP rating in Telugu, and now, the film’s music album has achieved yet another record on Youtube.

As per the latest reports, Ala Vaikuntapuramulo album has amassed 1.5 billion streams on Youtube, and it’s by far the highest number ever for a South Indian film. Interestingly, music director Thaman had revealed that Allu Arjun wanted an album which would cross 1 billion streams on Youtube. It’s no exaggeration to say that Thaman’s work and people’s reception has exceeded all expectations.

Directed by Trivikram Srinivas, the film had Allu Arjun, Pooja Hegde, Tabu, Jayaram, Sushanth, and Sachin Khedekar in lead and other important roles. The film went on to become one of the highest grossing films of all time in Telugu.