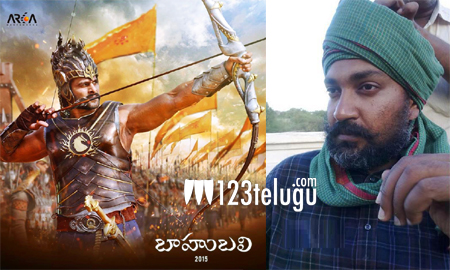 After a spate of mainstream commercial potboilers, director SS Rajamouli reinvented himself with ‘Magadheera’, the film that totally changed the entire nation’s perspective towards Telugu cinema. He then followed it up with the most innovative Telugu film till date, ‘Eega’. Now, this maverick maker is gearing up to redefine India cinema with his most awaited period extravaganza, ‘Baahubali’.

Yesterday, Team Baahubali unveiled a short video preview of the making and the visualization of the film to a thumping response at the ComiCon event in Mumbai. The video is now officially launched by the makers on the film’s YouTube channel a while ago. Fans and movie lovers are already going hysteric,looking at the historic feat being pulled off by Baahubali’s team under SS Rajamouli’s grand vision.

The video showcases the hardwork and the artistic brilliance of the film’s production design department as well as the efforts put in by hundreds of skilled technicians and actors for the last 2 years. Going by the trend, there is no doubt that ‘Baahubali’ will be a proud achievement for Telugu cinema.