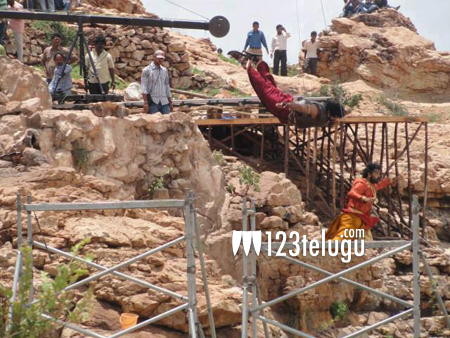 When it comes to using innovative techniques for filmmaking, S.S.Rajamouli is leagues ahead of his TFI contemporaries. He gave us a glimpse of what he could do with the film ‘Eega’ and he is now putting his heart and soul into the epic period drama ‘Baahubali’.

Because of the scale and setting of the film, a lot of set work and a huge number of props are required. To meet this demand, the production team is using a novel approach. Rajamouli has set up a huge work area inside Ramoji Film City, where more than 200 skilled workers are working on the film’s requirements. Award winning art director and production designer Sabu Cyril is handling this team. Sources say that the team has even come up with remote controlled replicas of some animals.

‘Baahubali is going to hit the screens in 2015 and you can be sure of an extraordinary visual experience. Prabhas and Rana Daggubati will be seen as the male leads in this movie and Anushka is the heroine. Arka Media banner is producing this big budget project.