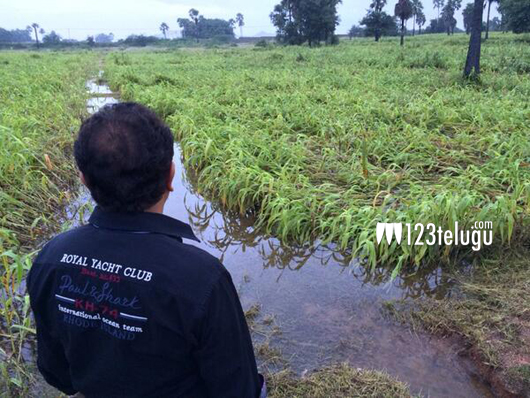 Baahubali is one of the most anticipated movies of the Telugu Film Industry and there are very high expectations on the project. The first look of Prabhas was released recently, to a thumping response from movie lovers.

The shoot of the movie is going on at a brisk pace in Ramoji Film City. Meanwhile, the heavy rains that disrupted normal life in most parts of Andhra Pradesh took a toll on the team of ‘Baahubali’ as well. The makers of the film have been cultivating a maize field for the shoot of a few sequences in the film. The heavy rains took a toll on the fields, making them practically useless for the shoot.

Director Rajamouli has expressed his sadness over the development. “We cultivated this maize field for a seq.A week before the shoot it is completely destroyed by the rains.sad!
Can imagine how the farmers feel when their cops get affected. Being film people we have quick fix solutions for all problems. But their misery is immeasurable”, he tweeted.

Prabhas, Rana and Anushka are the main leads in the film and MM Keeravani is the music director . Arka Media house is producing this big budget period drama.