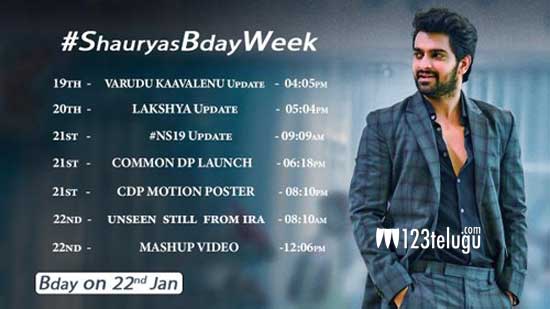 Hero Naga Shaurya will be celebrating his 32nd birthday on January 22nd. Starting today, the actor’s fans will be in for a series of back-to-back updates in the next 4 days. This evening, Varudu Kaavalenu’s makers revealed that a special surprise on Naga Shaurya’s character will be out on January 22 at 9 AM.

Tomorrow, there will be a special update from Team Lakshya at 5:04 PM. On the 21st, an update from Naga Shaurya’s 19th film will be out in the morning at 9:09 AM, followed by the Common Display Picture launch at 6:18 PM and CDP Motion Poster launch at 8:10 PM.

And on the 22nd, an unseen still from Naga Shaurya’s ongoing film being produced by his home banner IRA Creations will be out at 8:10 AM. Finally, a mashup video will be released at 12:06 PM.