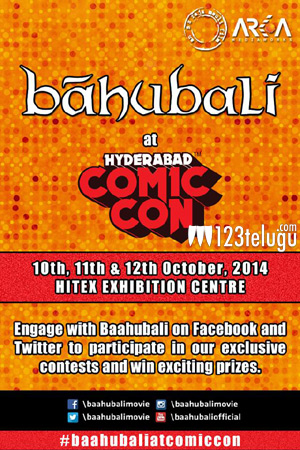 As reported earlier, Baahubali has made a grand entry to Comic Con, Hyderabad. Fans were seen flocking to the stalls of Bahubali, and trying out the props held for display. Interesting props like combat helmets, swords and other artillery used by the likes of Prabhas and Rana were a major attraction.

Bahubali is shaping up in a big way for a mid 2015 release. Incidentally, today is also the birthday of the director of the film, S.S.Rajamouli. 123telugu wishes him a very happy birthday and hopes he does the Telugu film industry proud with this film.