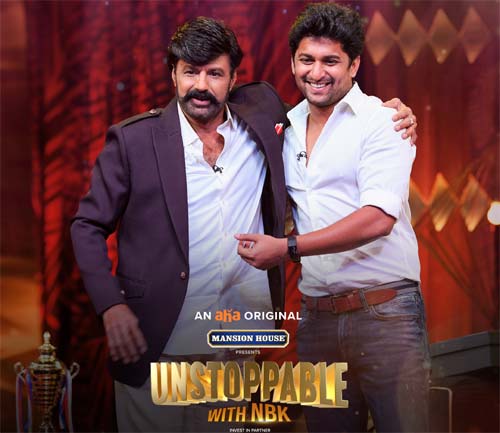 The second episode of Unstoppable, a celebrity talk show hosted by Nandamuri Balakrishna is available for streaming on Aha Video now. This episode is an entertaining one and it showcases Balakrishna and Nani at their candid best.

Balakrishna was at his usual best as he even commented about the troll-worthy thigh slap train sequence in Palnati Bramhanaidu. He jokingly commented that this scene was overboard and he is not proud of the same.

Balakrishna also spoke about ‘Mansion House’ and this left the viewers in splits. Also, Balayya spoke about occasionally slapping his fans and followers while out in the public. All these intriguing comments from Balayya added more zest to the episode.

Nani was equally good as well. He had a few fun conversations with Balakrishna and even poked the latter about a few quirky topics. Balakrishna came up with honest and genuine answers to the same.

Then came the serious part when both Balakrishna and Nani spoke at length about the the general philosophy of life.

Towards the end, there was an emotional moment as a kid who was treated at Basavatarakam Indo-American hospital, operated by Balakrishna came on the show and interacted with the latter. This was one of the special moments on the show.

All in all, the second episode of Unstoppable was indeed an entertaining one.