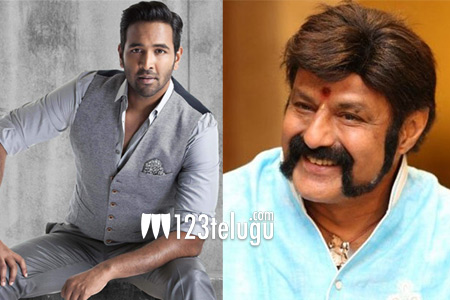 It’s well-known that veteran hero Mohan Babu is making his comeback to silver screen after nearly two years since the release of Mama Manchu Alludu Kanchu in 2015. The actor’s son Vishnu Manchu and actress Shriya, who will be seen in a special roles in Gayathri, started shooting at Ramoji Film City today.

However, the major attraction on Gayathri’s sets today was Nandamuri Balakrishna. Apparently, Balayya, who was shooting for Jai Simha close by, paid a surprise visit to Gayathri’s team and spent some quality time with them. Vishnu took to Twitter and said that Balayya’s presence gave a high to the team.

Gayathri is being produced by Mohan Babu under his Sri Lakshmi Prasanna Pictures banner. Writer-director Madan is directing this film and SS Thaman is scoring the music. Anasuya and Meda Meeda Abbayi fame Nikhila Vimal are essaying key roles in the movie.

Started shoot for #Gayatri from today. Got a visit from the one of my fav person to the set! My anna Balakrishna. Blessed me and spent enough time to make us all high! Wish I could tweet the photo; but not allowed to.