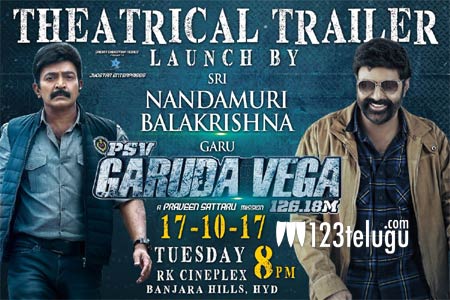 Senior hero Rajasekhar’s high-budgeted action thriller, PSV Garuda Vega 126.18M, has been making a lot of buzz ever since the film’s teaser was unveiled last month. The film is gearing up for its release on November 3.

And here comes an exciting update. Nandamuri Balakrishna will be unveiling the theatrical trailer of PSV Garuda Vega 126.18M on October 17 at 8 pm. The trailer launch event will take place at the RK Cineplex in Hyderabad.

Praveen Sattaru is directing Garuda Vega and M Koteswara Raju is producing it. Vishwaroopam and Uttama Villain actress Pooja Kumar is the film’s leading lady. Sunny Leone will be seen sizzling in a special song.