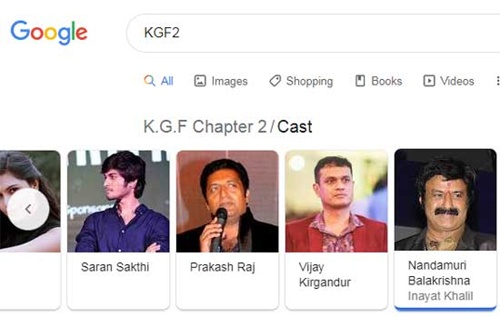 KGF Chapter 2 is one of the most eagerly awaited movies in the country. The Yash-starrer is in the last leg of its shoot and a grand pan-Indian release is being planned for next summer. Meanwhile, the world’s most popular search engine Google has pulled off a major surprise.

When you search KGF 2 in the Google search bar, in the cast list, apart from the photographs of all the film’s lead actors, Tollywood hero Balakrishna’s photographs also appears much to everyone’s surprise. Google further says that Balayya will be seen in the role of Inayat Khalil.

However, there has been no official announcement regarding Balayya’s presence in the movie from the makers. Well, this could end up as one of the major goof ups by Google in 2020.