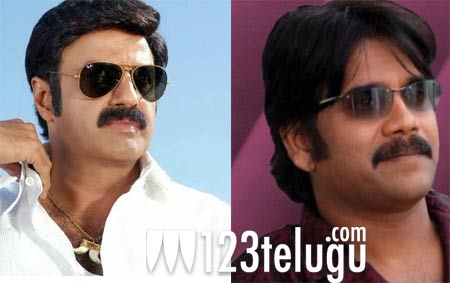 Among contemporary heroes,the Big 4 have by far dominated the Telugu Film Industry for the last two decades. They are Chiranjeevi, Balakrishna, Nagarjuna and Venkatesh. Out of the four, Balayya and Nagarjuna have made choices that have a very interesting similarity. Whenever an opportunity presented itself, they have boldly gambled on donning the roles of Gods or Patron Saints who served the Gods.

Perhaps these choices have to do with the legacies left by their illustrious parents – NTR and ANR respectively. Interestingly enough ANR portrayed roles of patron saints, while the screen avatars of NTR’s Lord Rama and Lord Krishna are now part of Tollywood folklore. In the second generation, on more than one occasion Balayya has donned the roles of Krishna and Rama. And Nagarajuna has excelled in the bhakthi-filled portrayals of Annamayya, and Ramadasu.

Balakrishna says that Sri Rama Rajyam, which will be released later this month, is a culmination of his long felt desire to carry the navarasas (in the mythologicals) to the masses. During the audio function of the movie, the actor revealed that he has plans to start more ambitious mythological ventures, the ideas for which he said were provided by the legendary NTR himself.