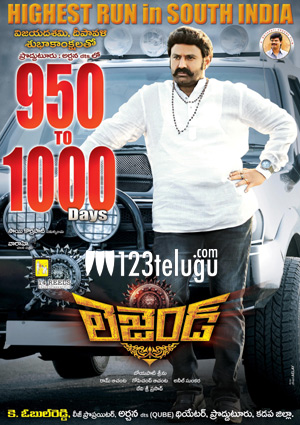 In a rare feat, Nandamuri Balakrishna’s blockbuster action drama, Legend, has completed 995 days on Tuesday and is all set to enter beach the 1,000 days theatrical run milestone. Incidentally, Legend is the first South Indian film to reach this mark.

Legend has been running at Archana Theater in Proddatur in Kadapa ever since its release three years ago. Yesterday, the film’s director Boyapati Sreenu and Archana Theater’s proprietor unveiled a special 1,000 days poster and thanked the fans and movie lovers for pulling off this stupendous feat.