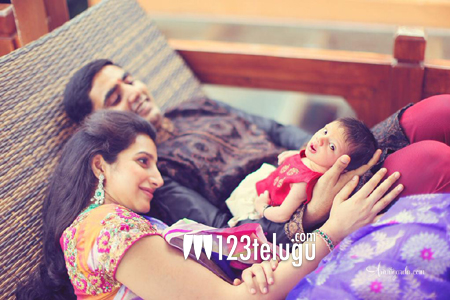 Film star turned politician, Nandamuri Balakrishna turned grandfather to a baby boy on the eve of Ugadi, 2015. Today, on the occasion of legendary actor and former CM of Andhra Pradesh, NT Ramarao, his grandson Nara Lokesh revealed the name of his two month old baby boy.

Tweeting a beautiful photograph of the little boy along with the doting mother Nara Brahmani, Lokesh said that their son has been named as Devaansh. Lokesh and Brahmini got married in the year 2007 and the couple finally turned parents after eight long years.

TDP and Nandamuri fans erupted in joy soon after the boy’s photograph and the name have been revealed.