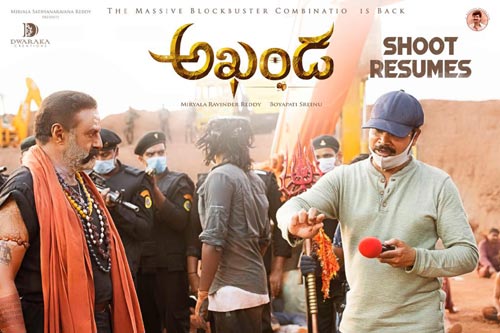 After being on hold for nearly three months due to the lockdown, Balakrishna’s Akhanda resumed its shoot in Hyderabad earlier today. Balayya and other lead actors took part in the shoot. The makers released a special working still featuring Balayya and Boyapati Srinu in action on the set.

What has caught everyone’s attention is Balayya’s Aghora avatar, as he is seen in black and saffron costumes rudrakshas and a salt and pepper look in the viral poster. Already, Balayya’s menacing Aghora avatar in the film’s teaser made it the fastest Telugu movie teaser to clock 50 million YouTube views.

Srikanth, Poorna and Pragya Jaiswal will be seen in lead roles in this Miriyala Ravinder Reddy production. Thaman is composing the soundtrack.