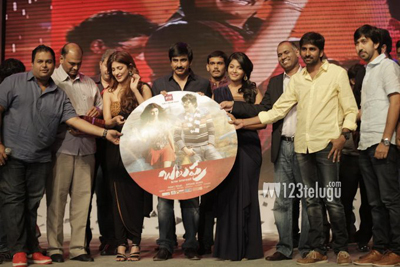 The audio of Ravi Teja’s upcoming film Balupu was launched a little while ago in Hyderabad. Directed by Gopichand Malineni, the film also has Shruti Haasan and Anjali in lead roles. Potluri V Prasad is producing the film under PVP Cinemas banner and it’s his first direct Telugu film as a producer in Telugu. Several dignitaries from Telugu film industry including Dasari Narayana Rao, KL Narayana Rao, Bandla Ganesh, Nandini Reddy, Ajay, Bheemineni Srinivasa Rao, BVSN Prasad, Sravanthi Ravi Kishore, Damodhar Prasad were some of the guests who were spotted at the event.

The highlight of the event was a dance performance by Ravi Teja, Shruti Haasan and Anjali. Talking about the film, Ravi Teja said, “I should thank my friend PVP, who has been supporting me right from the beginning and I hope he continues to make great films in future. Balupu is my second film with Gopichand Malineni and he’s an extremely hardworking guy. Thaman has given fabulous music once again and I can’t believe he made me dance on stage today.” S S Thaman has scored the music and the film is going to hit the screens on June 21.