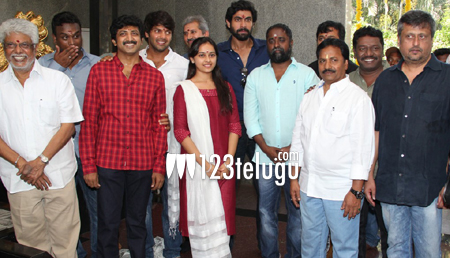 With uncertainty still looming over the Telugu remake of the Malayalam hit ‘Bangalore Days’, the Tamil remake has been launched this morning in Chennai. The film has been in news for a long while since its makers are having a tough time in choosing the right cast and crew for the Telugu version.

Interestingly, Telugu stars Rana and Sri Divya have been roped in for the Tamil version which will be directed by ‘Bommarillu’ Bhaskar. Meanwhile, PVP Cinema is considering to cast Varun Tej, Sharwanand, Srinivas Avasarala and Nitya Menen for the Telugu remake in the direction of Venu Sriram.

Now that the Tamil version has been launched, the cast and crew details of the Telugu version are expected to be unveiled soon. Keep watching this space for more updates about this film.