Bangarraju becomes the highest grosser in Nagarjuna’s career
Published on Feb 1, 2022 7:00 am IST 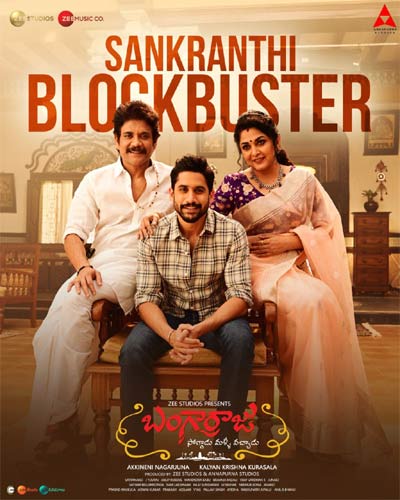 Akkineni heroes, Nagarjuna and Naga Chaitanya starrer Bangarraju has been raking in good numbers at the box office even in its 3rd week. Directed by Kalyan Krishna Kurasala, the fantasy drama was released on January 14, 2022.

The makers have officially announced that the movie has grossed Rs. 76 crores worldwide and still minting more in the coming days. This movie became the highest grosser for Nagarjuna in Andhra and Ceded. The movie made Rs. 12 crores alone in Ceded and doing well in Nizam as well.

While many Telugu biggies were postponed to later dates, Bangarraju was the only big film released for Sankranthi 2022. The movie has impressed the audiences and also collected solid figures in many areas.
Ramya Krishnan, Krithi Shetty, Faria Abdullah, Rao Ramesh and others played prominent roles in this movie, which has Anup Rubens music.