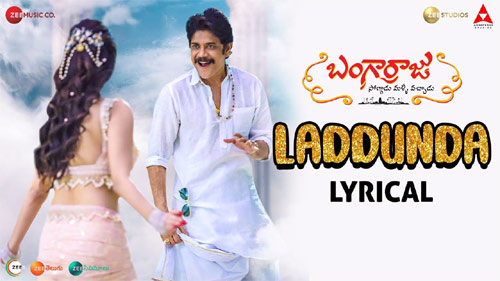 The much-awaited Laddunda song from Nagarjuna and Naga Chaitanya’s upcoming socio-fantasy family entertainer, Bangarraju, has been released just a while ago. In a pleasant surprise, Nag himself has crooned the song and needless to say, he aced it in style with his fun and energetic vocals. Even his Godavari accented dialogues in the beginning are not to be missed.

Laddunda song is shot on Nag and the film’s Rambha, Urvashi and Menaka. Going by the lyrical video, Nag seems to have had fun while shooting and fans are in store for his mass dance moves on the big screen. His trademark Panchekattu avatar is another major highlight of the song.

Dhanunjay, Mohana Bogaraju, Nuthana Mohan and Haripriya gave additional vocals for for this cheeky and naughty song penned by noted lyricist Bhaskarabhatla. Music composer Anup Rubens seems to be coming up with a winning soundtrack yet again.