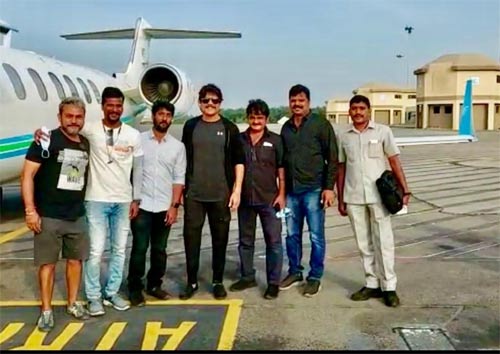 The unit of Nagarjuna and Naga Chaitanya’s highly-anticipated socio-fantasy family entertainer, Bangarraju, has landed in Mysore, Karnataka for a crucial schedule. Nag, director Kalyan Krishna and the rest of the core crew took a special charter flight to reach Mysore earlier this evening.

Bangarraju’s first single ‘Laddunda’ is all set to be released tomorrow (Nov 9) at 9:09 AM. The film is a spin-off to Soggade Chinni Nayana and the crowd favorite Bangarraju character in the movie. Krithi Shetty is the film’s female lead, while Ramya Krishna is playing Nag’s love interest. Annapurna Studios and Zee Studios banners are jointly bankrolling this much-awaited film.